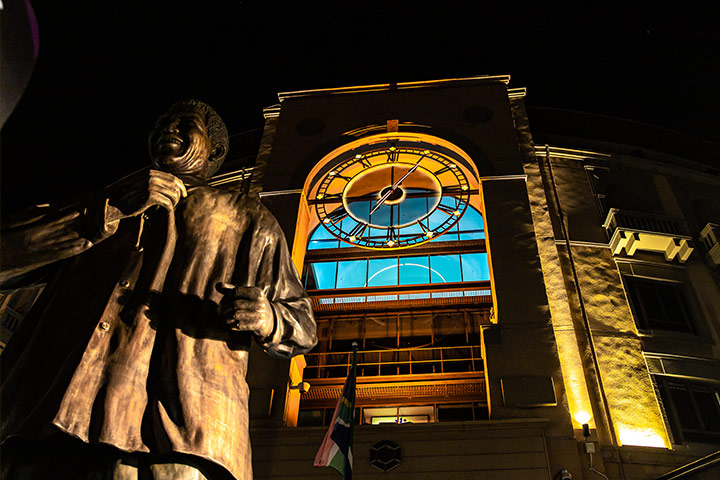 Nelson Mandela Square, known as an iconic architectural space, one steeped in South African history and art, has just unveiled the latest architectural addition to its space; one of the largest tower clocks in the Southern Hemisphere.

The clock comprises of diamond hour pieces, translucent numerals with satin black and gold finishes, and LED lighting to create a unique halo while illuminating the clock at night.

The owners of Nelson Mandela Square, Liberty Two Degrees and Liberty Group Limited, briefed architects Bentel Associates International, on the vision for this project, and Harry Kahn Limited were appointed for the delivery of the Swiss Mobatime Clock. The project consisted of the design, engineering, 3D fabrication, laser cutting, manufacturing, welding, and finally, the installation and lighting of the clock.

The Nelson Mandela Square clock took 240-hours to design, with most of the elements being fabricated from aluminium, where a total of 47-metres of aluminium welding went into its fabrication. Twenty metres of LED strip lighting was required for the lighting of the clock hands and halo illumination. The diamond hour pieces are illuminated by 96 LED lights, which required 60-metres of pole wiring to accomplish. 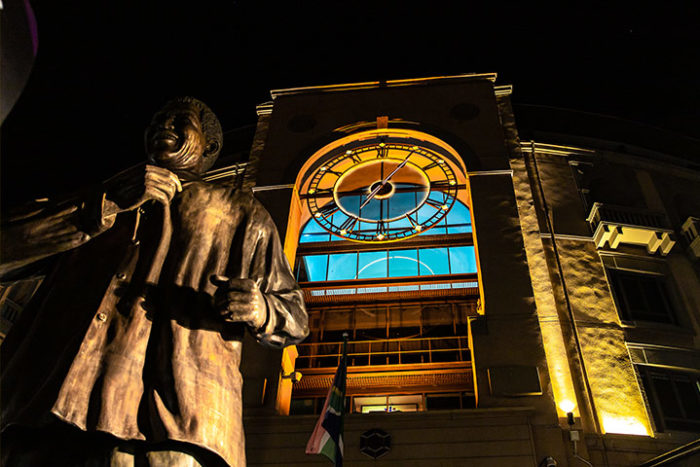 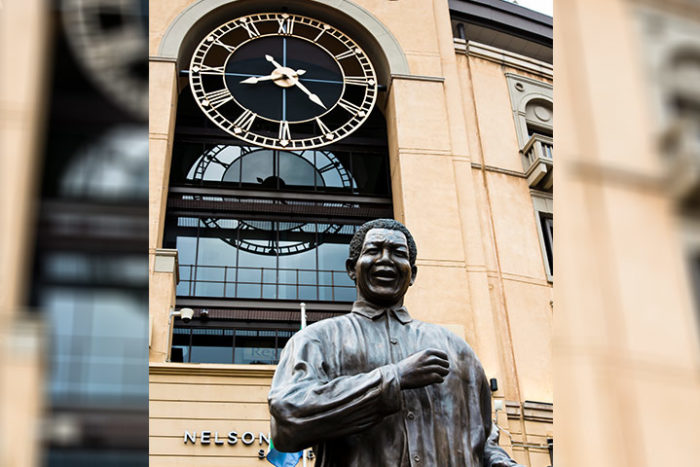 “Nelson Mandela Square’s Clock is magnificent; it is one of the largest engineering feats of its kind in the Southern Hemisphere. This feature embodies the sophistication of the space and complements the existing architectural design. Nelson Mandela Square is iconic, and this project has been particularly exciting as it takes retail property innovation to another level,” says Brian Unsted, Liberty Two Degrees’ Asset Management Executive of Nelson Mandela Square.

The clock is located in an archway in the West Towers of the building, situated immediately behind the Nelson Mandela statue, overlooking the Square. It is 5.75-metres in diameter, and weighs over 500 kilograms. The manufacturing of the project took a total of 4-months, while delivery and installation of the clock was completed within two working days.

Visitors to Nelson Mandela Square will enjoy this architectural gem, with its ambient lighting and delicate chimes.